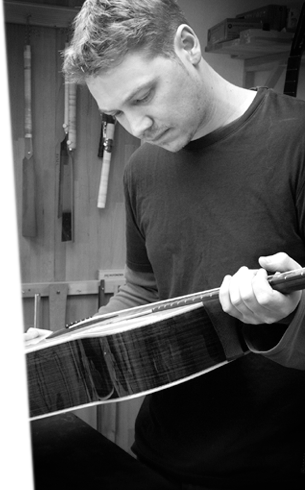 In 1997, Tino started his education in woodwork as a cabinet maker, as there weren`t any musical instrument making schools around. Patiently working and developing his new skills for several years and traveling overseas for 2 years, he took the ultimate opportunity and became a guitar maker (luthier). Since 2004, step by step, he worked and studied the art of guitar making beside the Master guitar maker Kazuo Sato. His dream became reality! Three years later, Tino lived the dream by opening his own company in germany and finally building his very own guitars.

Very quickly, guitarists recognized the meaningful value of Tino’s craftsmanship. Playability and acoustic properties are the main ingredients, for Tino, to compose the customer’s wishes. The authentic Battiston energy remains in every guitar!

The finely selected and maturely seasoned  wood is inevitably a big part of the sound quality. But the true art is to give a soul to the instrument ! Love of the craft and the attention to details play the major role. Then, it is up to the guitar player to bring this soul to life. „It's always very exciting when I finally elicit the first sounds from one of my guitars and it begins to live in my hands.“